Communicating the Risks of Nuclear Power 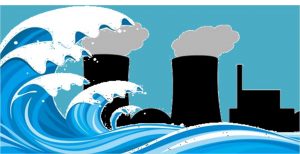 Imagine there is a commercial airplane on the tarmac. The weather is getting bad, but the pilot and airline determine that the weather will still allow for safe operation of the aircraft. The airplane takes off and once up at cruising altitude the weather takes a turn for the worst, exceeding the airframe’s design limitations, breaking off the wings and resulting in tragedy as hundreds plummet to the ground.

That is a really bad scenario and as a result, one would expect some sort of inquiry. Questions like, “Were the right decision made”, “Is the airframe robust enough for the changing climate”, “Do we need new predicative tools for the future” should all be asked. But would the predominate tenor of the public outcry be, “We need to ban all air travel”?

Fukushima was the nuclear industry’s aircraft accident. A lot of reflection and re-evaluation of how nuclear power is analyzed is certainly warranted. But this one incident seems to have been leveraged by nuclear energy detractors as a reason to abandon the technology all together. That perspective makes as much sense as banning the trucking industry because a tire shredded and caused a highway pile-up.

More to the point, Fukushima is an example of a worst case scenario – environmental pollution, long-term sicknesses, relocation of communities, loss of local economies, etc. But this worst case has been accepted as routine for generations in our energy greedy civilization well before nuclear power was around. Factor in how water and air quality impacts population health over the long term, I don’t think a rigorous analysis is required to understand that the consequence per MWh for nuclear is way lower than what we regularly absorb for legacy energy generation technologies.

Many nuclear power advocates feel the need to downplay the risks so there is not an overreaction by the general public or to overemphasize the advantages in attempts to persuade others. Unfortunately this results in the perception that they are nuclear fanatics and can’t see the dangers, or don’t realize that the danger exists.

As a general rule, there is no such thing as “clean” energy. There is a price to pay for energy production, whether it’s hazardous chemicals in solar panel production, bird strikes, nuclear waste storage, or coal ash. Claiming that there is any energy production technique that has no impact is whitewashing over this critical consideration. As a proponent of sustainable energy sources and nuclear power, the challenge has always been how to honestly address the risks of these less understood technologies without overstating the consequences.

Going forward we should all strive to be honest about the dangers of energy production – and weigh these dangers against the amount of energy generated. When viewed in this light, I will gladly defend the use of nuclear energy as a power source by comparing its damage to power production ratio relative to legacy power generation methods. I suggest you do the same.