Why the Loop is a Bad Idea 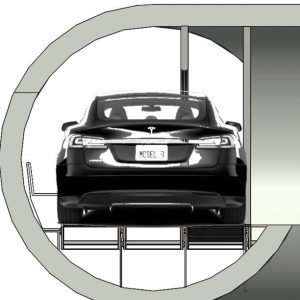 I’m as much prone to swoon over the latest insanity from Elon Musk as the next guy, evidenced in my e-blog post about Visionaries. Engineers have long needed a champion that wasn’t scared of blowing stuff up. That’s why when he started the Boring Company, I was all in on a faster way to make small tunnels and take some cars off the street. When it was first proposed, the use of elevators, car skates, and other mechanical marvels were proposed – all interesting, but conceptual enough that there was little danger of them becoming real and requiring any thought. I was just happy that someone was addressing the ridiculous cost and time required to dig a horizontal hole.

Then the concept of the Loop started forming. At first I paid it little mind and saw it as a stepping stone and something that made cool videos when they drove a Tesla through a barely large enough tunnel. Then they started digging in Vegas – things got real, and stupid. We’ll talk about how stupid at the end.

I’m a huge advocate of moving transit below ground and leaving the surface free for things that actually require sunlight, like parks and gardens. So it would seem as though I would be a supporter of a system that uses underground tunnels for cars. Wait – are we putting cars in there? Small vehicles with rubber wheels carrying a couple tons of mass to move one to four people? That can’t be right.

There have been many discussions about how the use of electric cars makes it efficient and how much nicer it would be to sit in a Tesla than a dirty subway train. Let me attempt to show my derision for each of these points with one sentence each. Moving 4000 pounds of machine to move at most 1000 pounds of flesh on rubber tires against asphalt hasn’t solved any efficiency concern. Sitting in a car after the latest drunk threw up in it is far less pleasant than being in the other end of a subway car while a drunk is throwing up (IMO). But enough with the instant derision, let me really drill down on my dislike of this solution.

My number one qualm with this whole concept is the inefficiency. Ultimately we’re driving a car through a tunnel that comes with all of the standard costs of moving a huge piece of machinery for a small amount of cargo. Regardless of where you get the power, you still need it to overcome the energy for acceleration (which is planned to be substantial), aerodynamic forces, and road friction. So you really save no more energy than if you had all of these Teslas above ground. Except that now you have automated Teslas driving empty to pick people up and you’re going at higher speeds, so you’re actually using more energy. In contrast a subway train runs on tracks for a reason. Low rolling resistance. A subway has a lot of interior volume for a reason. High cargo density. So even though it’s not obvious, on the whole having a massive train that stops and starts at all of those stations is probably killing the planet more slowly.

My number 1.5 qualm is the confusion on how this thing will actually work. All of the examples are the point to point description, “You get in a car in the suburbs, accelerate to 150 miles per hour, slow down at the end of the tunnel and get out.” Yeah – in that scenario your trip was very time efficient. For this to be a system that does more than connect two points, we have to be able to put in on ramps and off ramps. That’s doable, and I’ve seen a lot of concepts. Assuming you don’t want the main tunnel to slow down, you need enough on and off ramp length to get to tunnel speed before merging. Again I’m going to assume you don’t want this to be a carnival ride, so you limit the acceleration to something comfortable, like 1.5 m/s^2. That means you need around 5000 feet of tunnel just for accelerating, and you haven’t even merged (though with automation this could be pretty short – and scary). On the other end, you brake with 2 m/s^2 and you need almost 4000 feet of off ramp. So now each station would require a minimum of over 1.6 miles of tunnel running parallel to the main tunnel to support on and off ramps. There’s another implication here. You can’t have stops closer than 1.6 miles (or more likely 2 miles) apart. So as a public transit option, you may be walking a mile to your destination after you exit this magical car ride. Now we’re essentially drilling twice as many tunnels than promised, have to find a way to merge them (the current boring machines don’t do that implicitely) and we still have to walk a mile to get to our office.

Let’s get to the dirty little secret of “individualized mass transit” (as coined by our crazy genius). Every time you enter the Loop, you essentially enter a rental car – that has had dozens of passengers since its last cleaning. The nicest subway systems are those with no soft surfaces – so they can be cleaned with a hose. Imagine cleaning your car after 100 strangers used it to do everything from commute to move their pet skunk. I like that people think they want this solution in light of COVID. Think about getting into a car right now after someone with COVID used it. Sound like a good idea? The cleaning cost (and chemical usage) needed to keep this from being anything other than a cesspool would be enormous. Assuming you can keep on top of that, you have all of that rubber being worn off in a confined tunnel with high speed vehicles. Aside from the environmental implications, anyone that watches car racing knows, “marbles” will form quickly and will have to be removed somehow or your ride will be more exciting than planned.

Now for the most controversial qualm I have – capacity. There have been fancy simulations showing that you can get ridiculous capacity out of the Loop system. While I am capable of programming such a simulation myself, it’s not worth the effort since the math is easy. Let’s look at our single artery tunnel and generously grant that it’s in continuous use. I don’t know about you, but I don’t want to have a less than 2 second following distance between the cars – even with automation. What happens if there’s a blowout? Then the number of people in the car has to be addressed. I’ve seen silly things, but at most it’s five, and realistically it’s way less. I’m going to say that on average two people ride together, though single riders will be pretty common. And a lot of empty cars will be repositioning as demanded too, so I think I’m being pretty generous. Throughput is then just riders divided by time. In this case 60 riders per minute. Contrast that with a subway car. A standard NYC subway car can carry about 250 people and there are eight cars in a train (usually). Let’s assume it’s only half capacity and runs every 10 minutes (normally a reasonable assumption). This results in a throughput of 100 riders per minute. You’ll point out that the Loop tunnels are way smaller – and be right. But I don’t have to dig out the on and off ramps, and I haven’t maxed out the capacity (I could space trains every two minutes and fill them up). I really don’t care what the simulations say about onboarding and offloading (which is also suspect), ultimately you’re driving cars through a tube, which will be your bottleneck. And I don’t want to hear about boring out more tunnels. There is a limit –  structurally, architecturally, financially.

Now let’s talk about Vegas. The claim is that we’re going to put people that are hopped up on cheap booze into cars accelerating and braking hard to achieve high speed for a couple of miles. Sound great! Sign me up! High speed makes no sense. Those high capacity golf cart things you see in the airport would be a much wiser use of this tunnel – and way cheaper. Or Boring Company can respond to my e-mail and install high speed moving walkways. I recently noticed that a pedestrian and bike tunnel was added to their site. Maybe they’ll take me up on my offer!